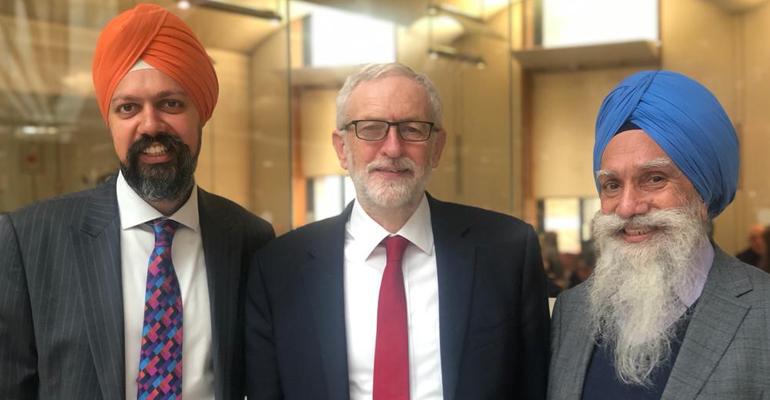 Paramjit Singh Raipur (SGPC member, Adampur) met with Jeremy Corbyn MP (Leader of the Opposition and national Leader of the Labour Party) in the British Parliament.

As an elected member of the Sikh mini-Parliament SGPC, Raipur thanked Corbyn for his two major pledges in the Labour Party election manifesto - to issue a formal apology for the 1919 Jallianwala Bagh massacre in Amritsar and to order an independent inquiry into the 1984 attack on Sri Harmandir Sahib (Golden Temple) to establish the extent of British Government advice to Indian authorities.

Raipur also invited Corbyn to visit the Punjab, in particular the Golden Temple, so that he could be formally thanked for his efforts for the global Sikh community.

Raipur has been in the UK for the last couple of months to campaign for the re-election of his nephew Tanmanjeet Singh Dhesi MP, who was successful once again from Slough.  He was joined by various other family and friends who had come from abroad to campaign, including Dhesi’s parents Jaspal Singh Dhesi and Dalwinder Kaur Dhesi, mother-in-law Satinder Kaur Kariha and Phagwara Councillor Davinder Sapra.