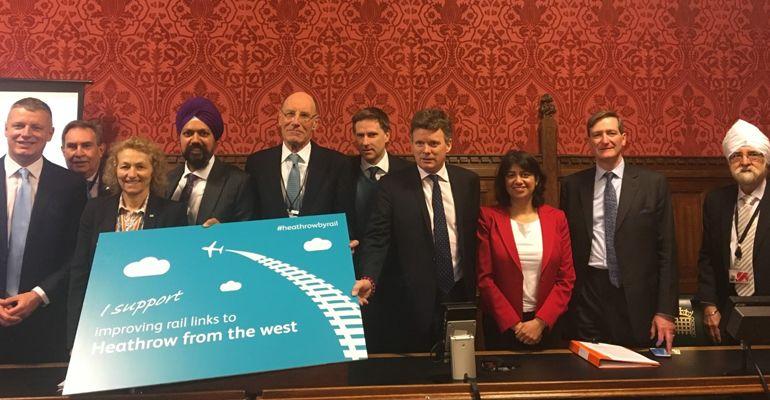 London (Jan Shakti News) On Wednesday evening a group of cross-party MPs, Members of the House of Lords, business and community leaders and local council leaders convened to discuss progress of the WRLtH project at an All Party Parliamentary Group (APPG) meeting. The meeting was an opportunity for the WRLtH Stakeholder Group (who meet regularly to discuss the project) to welcome wider support from Parliamentarians and external supporters.

Tan Dhesi MP (Co-Chair WRLtH APPG) opened proceedings by describing the proposed rail track’s benefits (both economical and environmental) while pointing out that local (Langley and Iver) concerns needed to be addressed. Richard Benyon MP (Co-Chair) then spoke of the huge advantages for Newbury, the South and West of England and Wales, while expressing dismay that it is taking so long to deliver.

A detailed presentation by Gareth Hurley (Network Rail) and Paul Britton (Thames Valley Chamber of Commerce) highlighted the transformational effects from the delivery of this scheme since 20% of the UK population would be within one interchange of the busiest airport in Europe.

Special Guest speaker Sir John Armitt (former Commissioner at the Airports Commission, former Chairman of the Olympic Delivery Authority and the current Chair of the National Infrastructure Commission) spoke about the benefits, while noting that a lot more work needed to be done and this could only be achieved through partnership.

The WRLtH proposal consists of 6.5km rail link between Slough and London Heathrow Airport. This connection would reduce journey times for passengers travelling to Heathrow from the South Coast, South West, Wales and West Midlands as there would be no need for them to travel through to London Paddington.

This move would also reduce congestion on some of the busiest motorways and roads and cut emissions dramatically. The train journey to Heathrow from Slough would be reduced from 52 minutes to 6 minutes, Reading from 68 minutes to 26 minutes and Maidenhead from 59 minutes to 14 minutes: CO2 could be reduced by 30 million road miles travelled annually.

Further, as 70% of foreign owned businesses establishing in the UK locate within 60 minutes travelling time of Heathrow, more efficient access would encourage even more investment to a wider range of areas. Therefore, it is estimated that the WRLtH could increase economic activity nationally by £800 million.

“It was wonderful to have such excellent, cross-party, business and community support at this very well attended APPG meeting. This long overdue scheme’s viability was overwhelmingly supported, and it presented the opportunity for a frank discussion of the issues surrounding the scheme that need to be addressed to make it happen.”

“This APPG was extremely constructive and reiterated the clear and strong support for a western rail link to Heathrow airport. Parliamentarians from both houses and across parties expressed their support. But it also demonstrated that nothing can be taken for granted and the delivery of WRLtH will only be achieved through partnership. This is the LEP’s number one infrastructure priority, so we’re determined to continue to play a full and leading role in that partnership.”

“I was delighted by the overwhelming consensus in the room for the new rail link. Given the low cost of building it and the benefits it will bring, not just to West Berkshire and the Thames Valley but the whole South West and South Wales, it is a no brainer that this project should be going ahead. I urge Network Rail and Ministers to now get on with it!”